A Summary of the Loss of UB57

A summary from Global Underwater Explorers :-
After sinking the City of Brisbane, the UB-57 headed for home in Zeebrugge, Belgium. During the journey, having first checked that the horizon was clear, she started to surface to run on diesels and recharge her batteries. Upon surfacing, Lohs opened the hatch to find himself almost directly beneath a low-flying British airship. A crash dive was immediately ordered, but they had been spotted and the airship started dropping bombs. Fortunately, they evaded sinking and continued their journey home. 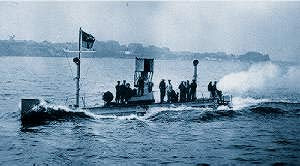 On 14 August 1918, Lohs radioed to base that he had sunk 15,000 tons of shipping and was returning to base. That night he started through the narrow and swept straits of Dover. Nothing more was ever heard from him but it is likely that he hit a mine near Zeebrugge. Lohs' body and those of some of his crew were washed up near the mouth of the river Scheldt about one week later. Lohs was one of the Imperial Navy's war heroes, having sunk an impressive seventy-six merchant ships and one warship, a total of 148,677 tons. During World War II, one of the U-boat flotillas operating from France was named in his honour.