Not too much to report but even getting a dive on the TRT is a little unusual for me! Thanks to the Skipper of "Fizzing" I managed to take part in a 32.6m dive on the wreck. The viz was good at 5 to 6 metres, but the depth reduced the total dive time to 26 minutes. Short & sweet. The descent line lay a midships on the starboard side. We mad our way along the hull to the stern dropping down to get a good view of the rudder & prop. Returning to deck level on the port side we looked for the gun but could not locate it. We did spot the spare propeller (blade) on the deck area and the remains of the three bar railings. Plenty of Bib and a few large edible crabs. A very nice (if short) dive. No new info to report. No cameras taken - what a pity!!!

Chris-P
Posted by Chris-P at 3:40 PM No comments:
Labels: Diving 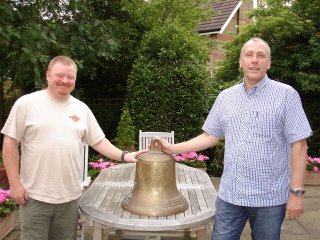 Andy, Tracey & Chris were kindly invited to the home of the Bromley BSAC diver who recovered the T R Thompson bell in 1989. An accomplished diver and wreck researcher he had recovered ten ships bells but the TRT bell was the largest (and heaviest) of them all. It took Andy & Chris to lift the bell out into the daylight for a photo. Finding the bell invloved a degree of good luck , the plan had been to dive another wreck but a fishing boat moored over that wreck saw Bromley BSAC relocating to the TRT. The bell was lying upside down in the sand with only the circular rim showing. The dive team had to use a lorry jack to push winches out of the way to free the huge bell - what a find! And more luck was needed to recover it, just as the bell was lifted one of lines to one of the lifting bags failed and the bell was only prevented from sinking out of sight by a diver holding the divers ladder in one hand and the bell in the other - Phew , a close one! Chris-P
Posted by Chris-P at 11:37 PM No comments:
Labels: Picture, Wreck Features

Just when I thought it was never going to happen - a surprise dive opportunity came along and the crew & divers agreed it would be on the T R Thompson.

The evening dive was a real bonus, air temp was warm, the sky was blue, the sea flat and the sun shining! Underwater viz lookewd like it would be good but was reduced to about 3+m and as the sun set the dive became quite dark. The shot landed around mid-ships and our little cruise around the wreck at 32m was constrained by time. We toured over the iron ore cargo and holds , found a huge boiler and engine but didn't quite reach the stern . A couple of good sized lobsters saw us and took up defensive positions but they were not our objective! Depth limited us to 29mins (inc 5m stop) so it was long ride (8miles) for a short dive but it was good to see the wreck I've not dived for nearly three years! It won't be so longto the next return!

Chris-P
Posted by Chris-P at 10:05 AM No comments:
Labels: Diving 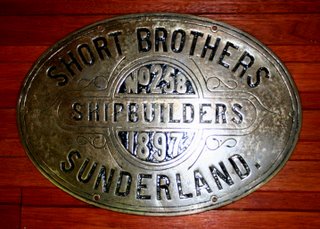 Arch researcher Andy N strikes again by tracking down the person who has custody of the TRT's makers plate. That individual has forwarded us a photo of the handsome plate.
Posted by Chris-P at 10:59 PM No comments:
Labels: Picture, Wreck Features
Newer Posts Older Posts Home
Subscribe to: Posts (Atom)