A line drawing of the UB-III type courtesy of www.uboat.net 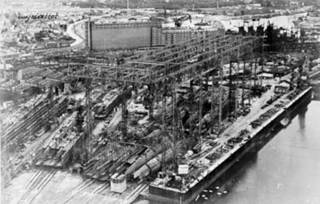 A G Weser Shipyard taken around 1939 as these are Type VII U-Boats (a direct decendant of the UB III type.)

The Roland in 1846, the Falcke in 1865. On 26th March 1873 the activities and firm became part of the AG Weser and the very first important order came from the Kaiserliche Marine.

During the First World War they constructed small cruisers and U-boats. D’Equevilley, who worked before at the Germaniawerft yard, was asked by the AG Weser to construct a new U-boat in 1912. As they now had their own U-Bootkonstruktionsbüro they immediately became part of the Ms Type U-boat program of the Marine-Amt. The first U-boats constructed over there were however not of the Ms Type but were UB I class subs, the UB 9-UB 15 series. Also UC I series and UB and UC II series were constructed at Weser.

By 1917 most of the work went into the construction of the UB III class. Three UC III were ordered in 1917 also but never got finished. 14 more UB III’s ordered in June 1918 were never started.

Also three U-boats for the Austrian-Hungarian navy were constructed over there, the U15-U17 series at Pola.

AG Weser was also responsible for the plans of the U 27-U 32 series and the U 40 that were constructed at Pola and Fiume for the Austrian-Hungarian navy and they also gave a licence for construction of three U-boats in Sweden, the Bävern was constructed at Kockums at Malmö and the Illern and Uttern at the state naval shipyard of Karlskrona.
Posted by Chris-P at 9:38 PM No comments:
Labels: Owners/Builders, UB57

Born on 24 June, 1889 at Einsiedel, Sachsen.
Son of plant owner Oswald Lohs. First ran school in his home village and later a grammar school in Chemnitz.

He entered the Kaiserliche Marine on 1 April, 1909. Had several commands as Fahnrich zur See and served from 1st October 1912 on the cruiser Strasburg on which he saw half of the world.

Saw action for the very first time on 28 August, 1914 and was promoted Lt.z.S. in the autumn of 1915. Moved to the U-Bootschule and got his first U-Boat command on UC 75 of the Flandern Flottille on the 17th March 1917, on which he did 9 patrols off the British coast.

On 2 January 1918 he became CO of the UB 57, taking over the command of this boat from another legendary U-Boat commander, Otto Steinbrinck. Lohs had also some very good ideas on U-boat warfare and new tactics and in April 1918 he received the Pour le Mérite.

On 3 August he sailed from Zeebrugge for the last time. The last contact he made with the base was on the evening of the 14th, as UB 57 was homeward bound roughly in the area of the Sandiette Bank, east of the Straits of Dover. Nothing more was heard. UB 57 is believed to have run onto a mine.

Ships sunk on this last patrol were the Clan Max Vey (5815 BRT), Glenlee (4915 BRT) and City of Brisbane (7094 BRT). In total, Lohs sank approximately 165.000 tons of shippin. Lohs' body washed up on shore a week later; he is buried in the military cemetary at Vlissingen.

On 4 October 1937 the III Unterseebootflottille was named after him at Kiel.

Some information on UB57 : 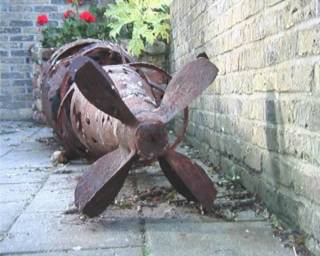 This is a torpedo recovered from the UB 61 - a U-boat of the same design as UB 57. It is believed to be a G6 torpedo, but there's not a lot left to go on! It would probably have been one of these that sank the T.R. Thompson.