Dolphins on the T R T

Way back on August Bank Holiday (29th Aug 2005) Dolphins were spotted on the wreck of the TRT , this was something special as dolphins are rarely seen of the Sussex coast at all. The local paper, the ARGUS reported the sighting.
Posted by Chris-P at 11:24 PM No comments:
Labels: Media/Press, Picture 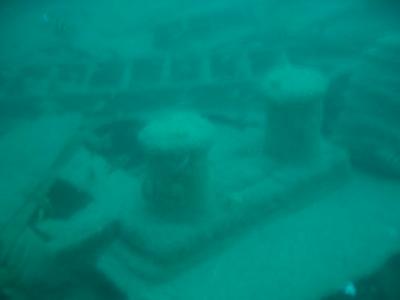 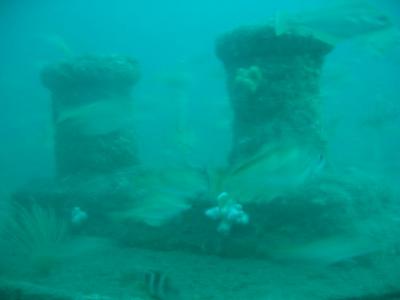 Posted by Chris-P at 9:11 AM
Labels: Picture, Wreck Features 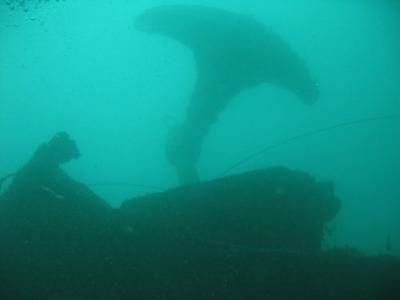 Posted by Chris-P at 9:09 AM
Labels: Picture, Wreck Features 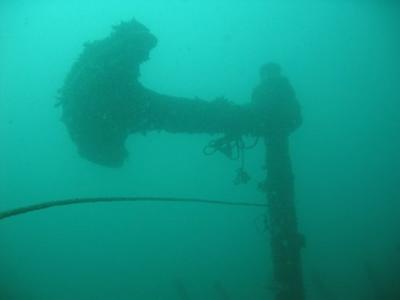 Posted by Chris-P at 9:02 AM
Labels: Picture, Wreck Features 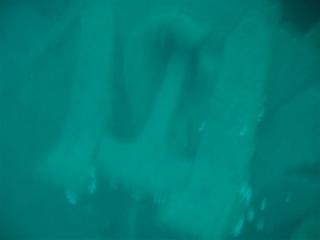 This photo of the TRT's anchor was taken by Matt Waterson on a recent TRT dive ! It's the first photo of the wreck that has been added to the blog for a long time , I hope more will follow! The plan was to create an extensive photo record!
Posted by Chris-P at 11:02 PM 2 comments:
Labels: Picture, Wreck Features

You wait for ages then all of a sudden two come along! Well that's how it was on Bank Holiday Monday (29/8/05) when TWO dives were made on the TRT! After all the false starts / near misses some dives have been done! Whey hey - hang out the bunting! And if that was not enough the divers reported DOLPHINS on the site / wreck (I kid you not!) The sighting has been reported to the Whale & Dolphin Conservation Society and should (we hope appear at some stage on their website :-

A full report from the dives is awaited!
Posted by Chris-P at 10:39 PM No comments:
Labels: Diving

Anyone seen the TRT?

The TRT dive planned for Sun 21st August was redirected to the Clodmore - with this number of cancelled TRT dives it is time to recognise the wreck is a 'Ghost Ship' , that is , a wreck about which there is much speculation but very few , if any, corroborated sightings! When a wreck becomes a 'Ghost Ship' and there are so little first hand obseravtions you have to start questioning whether or not it exits at all! If anybody wishes to prove me wrong I'd be happy to receive a dive report on the TRT!
Posted by Chris-P at 8:42 PM No comments:
Labels: Diving

Two TRT Dives on the Cards!

Two dives on the TRT are planned for 21st and 29th August - if these take palce (!!) they should be very good - this is the best time of the year for viz! Hopefully someone will tell us something new about the wreck and maybe sketch it or photo it! Oink , Oink - look out low flying porcine!
Posted by Chris-P at 9:28 PM No comments:
Labels: Diving

The TRT dive planned for the evening of Saturday 6th August was cancelled due to insufficient numbers of divers on the booking list - the TRT is surely jinxed!

Get your place booked!
Posted by Chris-P at 11:04 PM 1 comment:
Labels: Diving

It's a roll over! There , once again, were no winners on the TRT dive planned for 31st July 'cos for the third time in succession the dive was cancelled! We are running very low on excuses and so had to spend some time thinking up this one:-

The reason it was cancelled was because all our boat skippers were unavailable, the Skipper who had been pencilled-in to take the boat out was delayed on his return flight to the UK from the Red Sea and as a result could not take the boat out.

We are now opening a book on the fourth attempt - it's a bit like an accumulator, get your bets in - someone , one day is going to win big time!
Posted by Chris-P at 8:43 PM No comments:
Labels: Diving

Everything was set for the "Wreck Tour" , dive team ready , boat ready but unfortunately no one had remembered to sort the weather out! Force 5 winds, low surface vis, rain and recent poor underwater vis sealed the fate of the dive - cancelled! John Liddiard used the freed-up time well by providing the dive team with insights of work & techniques along with some helpful tips on identifying steam ship faetures. Another date will be planned!
Posted by Chris-P at 11:20 PM No comments:
Labels: Diving, Media/Press

I am indebted to John L of Diver Mag who has pointed out that the sketch added to this blog on Tuesday, December 14, 2004 is a plan view of a triple expansion engine! Reckon I should have known that - but didn't ! Thanks John.
Posted by Chris-P at 7:28 PM No comments:
Labels: Wreck Features

19th May has been chosen for the DIVER Mag "Wreck Tour" . The dive team will soon be selected. The plan is for the team to dive on Nitrox for this dive . Max depths I have reached on this dive site is 30.5m , and 'shallowest' Max depth has been 27.4m , should give some indications for calculating Nitrox blend! Fingers crossed for good vis!
Posted by Chris-P at 8:22 PM No comments:
Labels: Diving

Hoping to put together a 'Wreck Tour' during the merry month of May. Planning is now underway ~ and who knows the TRT project may get a bit of a boost with regard to new information and more interest! Watch this space!
Posted by Chris-P at 7:53 PM No comments:
Labels: Diving 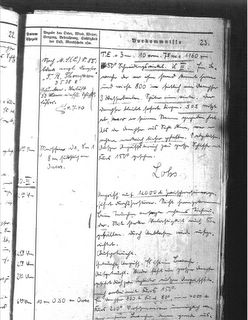 Now for the next page... if anybody can translate these pages from "naval" German I can send them the files... 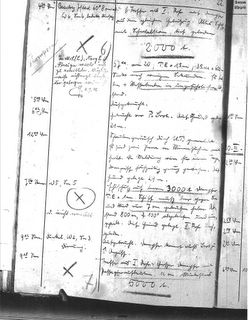 Here are the relevant entries from the KTB. The note in the column at the top of the right hand page which names the Thompson was anotated in 1940 (or so it says) - the formula that starts "T.E" seems to be a ranging calculation for the torpedo attack.

I am awaiting a reply to an e-mail from a researcher who I believe to have a copy of the KTB (Kriegstagebuch) or War Diary of UB-57 - This almost certainly will have an entry regarding the sinking of the Thompson, and is genuine 24-carat gold as far as information is concerned. It IS source material. 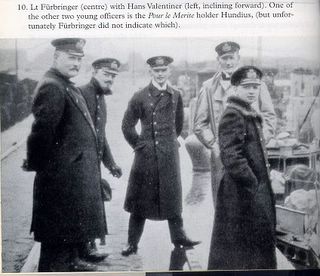 This photo was taken from a book entitled "Fips - Legendary U-Boat Commander" which refers to Werner Fuerbringer (centre) - The other officers are (l-r) KK Bartenbach, Hans Valentiner, Fuerbringer, Johannes Lohs (light coat) and Paul Hundius. Therefore, the central character is the only man NOT to receive the "Pour Le Merit" decoration (known to fliers as The Blue Max). These are 5 of the most important U-Boat captains of WW1... it's also one of the only other photo's of Oblt Lohs I've been able to find.