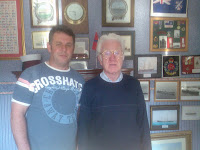 With all the work on the T.R.Thompson project recently I had been put in contact with a gentleman called Alf Rodenby (above) . Alf is an expert on the James Westoll Line the owners of the T R Thompson. Today I had a chance to meet him and his wife at their home in Leicestershire. I was given a tour of his extensive collection of photos paintings and research. Alf has a wide knowledge not just of the Westoll Line but all Sunderland owned ships and has offered his help where he can with our project.
I will give a full report of our meeting at the next MD bash .
Tad
Posted by Tad at 7:27 PM 1 comment:
Labels: Owners/Builders, Research Topics

I have just got off the phone from a relative of two of the survivors of the T R Thompson sinking after the BBC had forwarded the family details to Meridian Divers.

The relatives Great Grand Father and Great Great Grand Father both managed to escape the ship along with one other crew member as the ship went down. They survived by holding on the part of the wreckage that was left floating after the ship was sunk and were saved by a trawler who arrived on the scene later.

I have put this relative in contact with our other original contact and will be speaking to him again in a few days time.

I now have also been in contact with a gentleman who has written a book on the Westoll Line and happens to know everything there is to know about the company and its ships including the T.R.Thompson and also has personal commections with the company.

It is also happens that next week I am at a meeting in Leicestershire 3 miles from where this gentleman lives so have made arrangements to visit him. Will feed back afterwards.

The project is growing by the day.