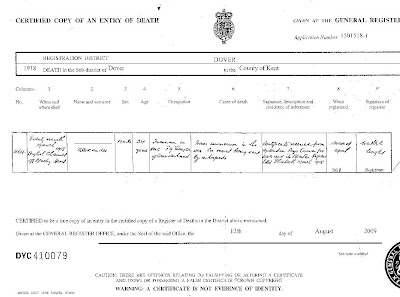 I have been contacted by Robin who has been conducting some family tree research . As a part of his research into a man called Elijah Alexander, born 29th March 1882 in Lambourn, Berkshire, he checked a substantial number of death records which led him to discover a record for an Alexander (with no forename), whose death certificate shows that this Mr Alexander was a Fireman on the HMS T.G.Thompson, and died on the 29th March 1918 when the ship was sunk off Beachy Head following it being struck by a torpedo.

The certificate (copy shown above) is quite difficult to read. It has been interpretated as follows:-

No. 464.
When & Where died: Twenty ninth March 1918 English Channel off Beachy Head.
Name and Surname: -------------- Alexander.
Sex: Male.
Age: 34 Years.
Occupation: Fireman on HMS "T.G.Thompson" of Sunderland.
Cause of Death: From immersion in the sea his vessel being sunk by a torpedo.
Informant: Certificate received from Sydenham Payn, Coroner for Dover and its Liberates. Inquest held : Thirtieth March 1918.
When Registered: Second April 1918.
Registrar: Walter E Wright.

The circumstances, the date, the location all seem to point to this death being linked to the sinking of the SS T R Thompson, however, neither the crew list for the journey from South Wales to Beni Saf in Algeria (the trip before it's fateful last journey back the UK) , nor the casualty list from the Commonwealth war Graves Commission show any member of the crew with the surname of Alexander and the only person with that name as a forename was much younger.
It would seem a new mystery has been uncovered, who was this Mr Alexander and why does his name not appear on any of the crew or casualty lists we have found so far. We will need to do some more research.

Strange that it's TG and HMS?
Never heard of an HMS with initails though.
Interesting

Hi Jim, I thgink "TG" and "HMS" are just 'errors'. The really interesting bit is the mystery of Mr Alexander ...I'm sure some checks in Dover will shed light on this!
HMS may have been wrongly applied as the ship was an armed merchantman, these ships would often have RN or RNR gunners on board to operate the deck gun.

the plot thickens looks like another mystery thats needs to be solved very strange that the ship is listed as an HMS and T.G but due to the dat and location it can only be the T.R.T As I am in Dover a lot for work quite happy to sort this out just point me in the right direction